Since Qatar seems to have the aim to become one of the leading football states, as least in Asia, the state invests a lot in football with and teams with the result of beautiful stadiums across Qatar that represent the home grounds of Qatari teams. As Qatar is known as a luxurious country, its stadiums do not lag behind in terms of architectural style, capacity, and size. The Arab world is already known for massive buildings and facilities and the stadiums do not deviate from that rule either.

Khalifa International Stadium or the National Stadium is situated in the capital of Qatar Doha and is used for many purposes. The stadium is part of a bigger sports complex including the Aspire Academy which promotes football youth and produces players for the Qatar Stars League. The complex also includes the Aspire Tower 300 meter tall hotel. It is the biggest Qatari stadium with the capacity of 40,000 and it was established in 1976. It is the home ground of the Qatar national football team and has witnessed many victories of the domestic football team on its court.

In 2005, the stadium was renovated according to the latest modern standards as to host the Asian Games of 2006. It expanded form a 20,000 to the current 40,000 capacity. The remodelled stadium includes a roof over the western part.

Its original purpose was football, but now it also hosts the most distinguished athletic events and tournaments like the Athletic Grand Prix.

The stadium became also a host for international games like the England and Brazil friendly football match in 2009.

Its international recognition is also reflected in upcoming sports events which are going to be hosted at this stadium. The IAAF World Championship in Athletics is going to be held at this distinguished world-class facility in 2019, and 2020 is even going to be better, since the FIFA World Cup 2022 will take place at the Qatari Khalifa International Stadium. 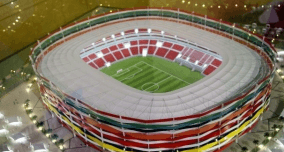 The Thani bin Jassim Stadium is located in Al Rayan, and even if it serves many purposes, football matches prevail wherefore tha stadium is mostly used. The stadium is spacious, although somewhat smaller than the first one, with a capacity of 25,000. It was opened in 2003. One of the major vents that the stadium witnessed was the 2011 AFC Asian Cup.

The stadium is going to be renovated for the 2022 FIFA World Cup and will include 44,740 seats for spectators, which means that it will exceed the national team stadium in capacity. The stadium project includes spectacular ideas for the stadium adaption as to feature the colors of the qualified teams’ flags on the façade which should represent mutual tolerance and friendship.

The Ahmed bin Ali Stadium or the Al-Rayyan Stadium as it is the domestic ground of the Al-Rayyan sports club, one of the mightiest sports clubs in Qatar. The 25,000 capacity stadium was built in 2003 in the wake of football fever in Qatar. The 2000s were especially significant for Qatari football since it started then with major promotions at the international level.

As already mentioned, Qatar will host the 2020 FIFA World Cup, which also means that this stadium is going to be pepped up in order to offer only the best to its international guests. Qatar definitely tries to impress as a host by rebuilding all stadiums which will host matches, including the Ahmed bin Ali Stadium, which is going to have a projection screen on the façade running news, commercials, FIFA tournament information, updates. Qatar is known as a hot country, and the management is going to shade all seats.